Archive for the ‘bread’ Category

I have never made bread before because it seemed like a daunting task.  It seemed like something that took a lot of time and skill.  I am an intuitive cook.  Everything comes together based on my mood and what I happen to have in the kitchen.  Part of the fun of cooking is finding out what the end result will look like.  Making   bread seemed like the opposite of that. There was planning that needed to happen and a lot of watching and kneading and steps and processes.  This is why, even though they are lovely, I have never tackled baking macarons.  Lovely in theory but beyond my ADD-emotionally-laced skill set.

Then I found a few recipes like this one and this one that looked doable.  There were pictures and step-by-step instructions.  There were down times where I could walk away and do something else.  And best of all the times weren’t  precise.  If the bread rose for 2.5 hours instead of 2, oh well. It didn’t kill the bread or turn it into something inedible.  I decided to be brave, go buy some yeast, and try my hand at this artisan bread-making-business.

In the baking aisle, Krusteaz has these no-knead artisan breads in a box.  I looked at the directions on the back and they were pretty close to the straight-forward from scratch version.  The other half said it would be a cool idea to make a boxed loaf and then make a scratch version and see what the difference was, if any.  I decided to buy the sourdough version to see how different in taste it would be.

The first picture above is obviously the sour dough bread from the box. It makes one loaf.  The bread in the plastic orange bowl is the scratch version. The recipe makes three loavess.  Other than that, the directions were the same.

Mix ingredients together in a bowl until it’s an ugly, wet mess.  Cover and leave in a warm place for at least two hours or until the mixture has tripled its size.  Grease your hands.  Put some flour down on a flat surface.  Form a ball with the dough.  Let it sit for another 40 minutes to let it rise and flatten out a bit.  Grease the pan that you are going to cook the bread in and put the bread in it. Preheat your oven to 450 F.  Cut three 1/4″ slashes across the top of the bread.    Fill a pan full of water and put it on the rack that is below the one you are going to put the bread on.  Place the bread on a rack that is higher than the one holding the water.  Cook for about 35-40 minutes or until the bread has a dark brown hard crust.

I followed both bread recipes to the letter.  My bread did rise and baked very nicely.  However, it wasn’t as pretty as the ones I saw on the recipe pages.

Here is the sourdough one. The stuff on top is baked flour.  The recipe called for a sprinkling of flour over the top before you baked it. 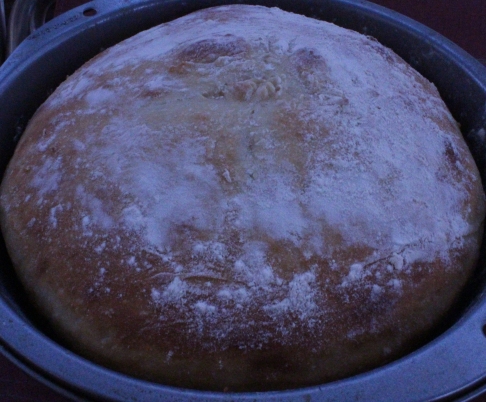 Overall, it was a lovely, tangy bread. It was light and springy.  However, it didn’t have that awesome tough crust that make artisan bread so yummy.  You have the hard crunchy bits and then the soft, fluffy insides. That’s how I like my bread. Yummers.

Even though it didn’t have that hard/soft texture it still was really good bread.  It was gone in a day because everyone kept eating it.

This is the from-scratch version.  It didn’t rise as much but it was hands-down the crowd favorite. Even though I did score both breads with my knife three times like the directions called for they didn’t show up on the final product. 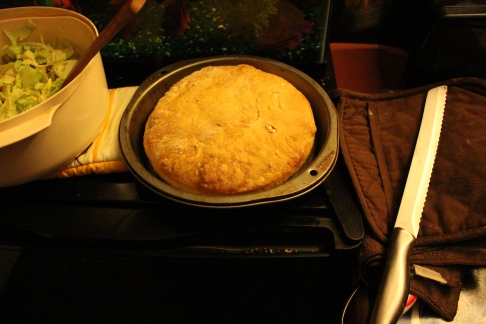 The scratch bread didn’t have a tang to it. However, there was that crunchy/soft texture that the sourdough bread didn’t have.  Everyone seemed to love that more.  As far as bread goes, though. Both loaves pretty much disappeared the same day I made it.  Actually, I made four loaves and within two days I had no bread.  So, even though the from-scratch won the taste test. It didn’t stop anyone from eating the sourdough version. 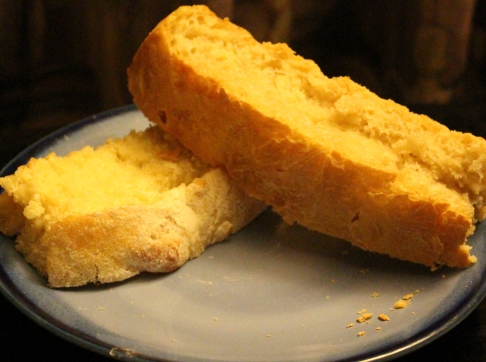 If you are looking at what bread is more financial conscious the scratch bread wins hands down.  The boxed bread was around $3.50.  The scratch bread costs about $3.50 for three loaves which is way cheaper.

A few days later, I went grocery shopping and bought more yeast. I got adventurous and decided to try out my own recipe of artisan bread.  It was the basic no-knead artisan bread recipe except that I added fresh, chopped, rosemary, sage, thyme, some julienne sun-dried tomatoes and some grated Parmesan cheese.

I found a bread pan and decided to use it so that the bread would come out more like a loaf than a round blob.  This was mostly so that I didn’t have to spend as much time trying to make it look pretty.  Instead, the bread pan would do it for me.  Also, I made two loaves instead of three.  It was the bread pan.  It’s just bigger and I went with it.

The other thing I changed was by accident. I forgot to put the water in the oven to steam the bread.  The loaf  just got pushed into the oven and cooked until it was a beautiful golden brown with a hard crust.

Overall, I like the look of the bread pan over the round pan.  It’s just an aesthetic thing but I love the rustic look of the loaf when it comes out looking like a real loaf of bread.  The herb artisan bread was wonderful. We ate it with homemade spaghetti sauce and meatballs over fried polenta. 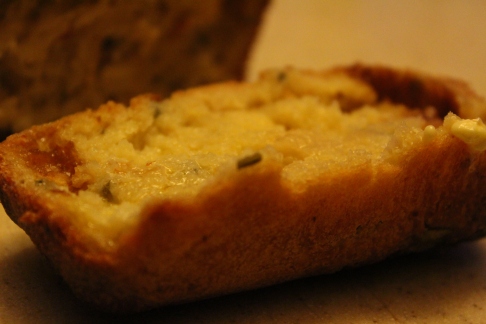 Even with the extra herbs and making two loaves instead of three, the herb artisan bread was still cheaper than the sourdough bread.  Tallied out, the herb bread was about $2.50 a loaf.  Pretty cheap for wonderful, warm bread straight from the oven and slathered with butter.  A piece of perfection with a crusty outside and a soft, fluffy inside.

Yesterday, I went to the grocery store again to get some more yeast.  This weekend I am going to mess around with some bread recipes.  I am going to use my own method of doing two loaves instead of three and no steaming the bread.  I didn’t taste any difference without the water.

The other half likes the basic bread recipe all by itself.  He says the bread doesn’t need anything but butter.  My nephew who lives with us doesn’t care what kind of bread I make as long as I make some.  So, I think I am going to make one plain and then one with some fun ingredients.  I haven’t decided yet but part of the fun is making a recipe on the spot.

If you get brave and decide you wanted to make bread try out this no-knead recipe here — It’s really straight-forward and has lots of pictures.  You will be pleased at how easy it is and how much you are going to love it. Once you get the hang of it the sky is really the limit.  Have fun with it! And make sure to pat yourself on the back for being so creative and awesome. 🙂

Error: Twitter did not respond. Please wait a few minutes and refresh this page.